There lives an Oracle with the power to change the flow of the world written here.

A Novel Both Written and Played:

The Oracle is a random dice roller for the gaming platform, Discord, and Ironsworn is a tabletop roleplaying game. And I’m a novelist. What I have created for you is not a novelization of a game, nor is it a creative explanation of a throw of the dice. This is something unique which weaves a path amidst the two.

This is the Ironlands. The gods are many; magic is rare and dangerous. Monstrous beasts stalk the wild areas, but they can be tamed. In these lands when one swears with their hand upon iron, it becomes a vow of solemn determination treated with utmost gravity. The Ironsworn make a living of it. Powerful, traveled, and often gifted with magic, they journey as they please, finding those who are seeking help, or perhaps in service to their own needs.

Proklis is a Slayer, an Ironsworn whose vows focus on killing elder beasts and corrupted horrors. Yet he isn't rugged, burdened, and grim like Ironsworn are expected to be. Calm, determined, and with a social yet deadpan sense of humor, Proklis is self-assured in a world where survival is a constant balance between violence versus the kindness of others.

After a series of absolutely horrific rolls, Proklis limps into the elven city of Deepwater. He finds safe haven, strong friendships, and forms Bonds with the people there, but the city is unaware that a wall has broken deep in the bat warrens and corruption has begun to leak into their home.

About the tone and about the author:

The Ironlands I constructed is reminiscent of Glorantha. The amalgamation of cultures, themes of travel, and Proklis’ demeanor have a somewhat Samurai Jack feel. And the tone follows the typical Shakespearian structure of cutting drama with deadpan humor. I approached the setting from a leftist perspective, painting it on a feminist canvas. For all my works, reader feedback has consistently said that my descriptions and immersion are both vivid and powerful. They are my greatest assets. I have a degree from the University of Illinois with a major in classical Latin and a minor in astronomy; an odd combination for sure but basically, I majored in fantasy and minored in science fiction. With all my heart, I hope you enjoy this work.

This work is based on Ironsworn, created by Shawn Tomkin, and licensed for our use under the Creative Commons Attribution 4.0 International License. Also available here: https://shawn-tomkin.itch.io/ironsworn

Thank you so much!

And, uhh.... *Lifts the lid from the simmering pot, and takes a little taste. Grabs some setting seasoning. Checks the braise on the backstory.* A little while yet. Can I grab you a snack?

(*Peeks at the mushrooms. Makes a creepy-crawly grimace that will only make sense to the audience after reading the second book. Puts the mushrooms back in their... "fermentation" hole.*)

Your work inspired me to start my own game of Ironsworn and adopt a similar writing format as a result. I greatly appreciate your contribution both as a resource to understanding the game as well as a literary mind.

I look forward to finding out what fates have in store for Proklis (although I've only just finished Session 2 of the book so maybe there's a lot to unpack!)

Hi! Just wanted to express my sincere appreciation for the Unspoken Vow. Picked it up after you posted it on Reddit. I’m a recent Ironsworn convert and your book has been a fantastic resource for learning the game and garnering story ideas. Thank you!! 🤗👍

This was a really cool read! A great play report, a really cool demo of how moves are used in Ironsworn, with some interesting homebrew and wonderful characters and development of elf cultures. Really loved the characters, the fights were intense, and that bear! *shakes fist in the direction of the bear*.

I'm still pouring myself into this story, but had to take a moment to say I LOVE The Unspoken Vow so much! Margot has done an amazing job of taking Ironsworn -- an excellent game -- and fleshing everything out. The story is thrilling and, maybe unintentionally, is a great tutorial in playing Ironsworn.  The "loading screens" (the things between the chapters) are so creative. I've got a few more chapters left but HAD to share my thoughts.

Also, shout out to Proklis. That man is going through a lot. lmao

Thank you so much! This means a lot to me, especially knowing it comes from another great writer!

Any chance for a .epub version?

Ah this day has come. Sooner than I expected... The litany of challenges that come with conversion to .epub is a beast I knew I one day must face. For you, fozbaca... I shall brave this challenge.

Awesome. Already following and I have a some ePub creation experience if you have any questions.

Oh hell yea! I'll hit you up if I get stuck!

It would be easy to say this is the most robust gameplay report I have ever seen, but it's much more than that. It's a novel - with character developements, changing relationships and twists. Yes, sometimes it could be more polished, but we have to keep in mind that the author didn't have the luxury of knowing how it's going to end - or even how exactly it is going to get to the end! As everyone who played Ironsworn knows, the dice often surprise you and planning the story ahead is usually not a good idea, so I'm not as hard on this book as I would be if it was a "regular" novel. I also like that the author included materials related to the game side of the story - character sheets, assets and rolls. It also makes it easier for people not familiar with Ironsworn to understand what's going on.

Overall - I enjoyed reading The Unspoken Vow, the main character is a sympathetic guy, and I liked the depiction of the elven culture. A lot of effort went into this book, and it shows. I'm looking forward to more of Proklis' adventures.

Thank you so much! I'm thrilled you liked it, and absolutely there is more to come!

"didn't have the luxury of knowing how it's going to end"
Deus Elf Machina. 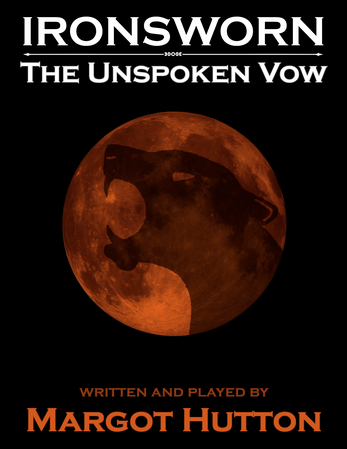 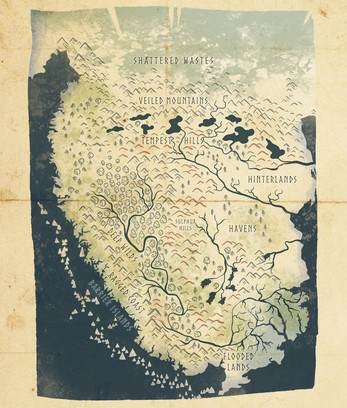 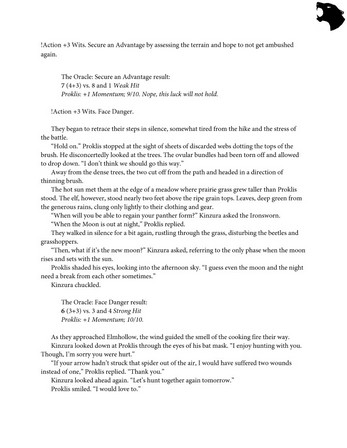 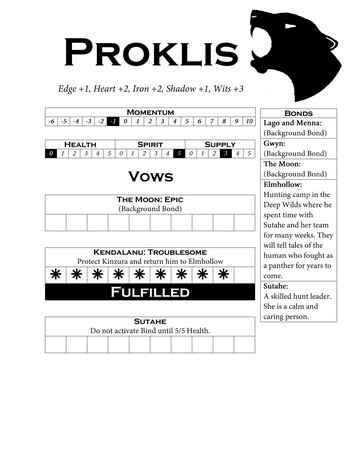